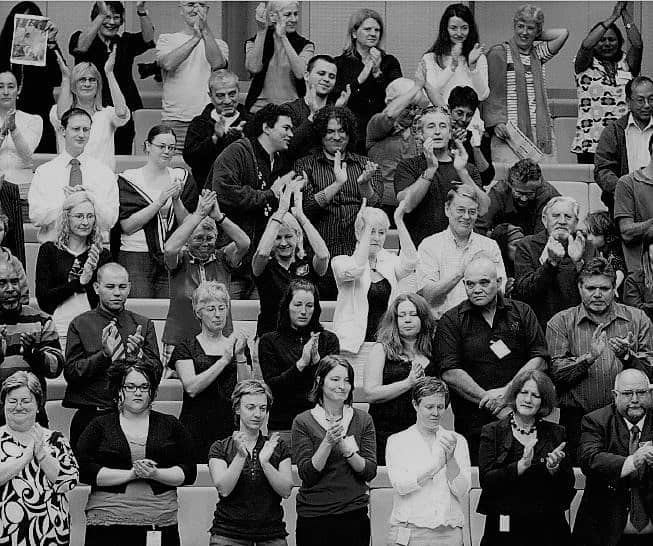 Check out the woman third from the right in the front row.

This pic was on the front page of The Australian in 2008. That’s me in the chamber of the House of Reps in Parliament House, watching Kevin Rudd’s apology to Australia’s Stolen Generations.

My strongest memory of that day is the conversation I had with Kevin ’07 over a cucumber sandwich at ‘the after party’. I asked him how to deal with the whitefella guilt and shame that was rampant in the Department of Aboriginal Affairs, where I had been working.

Sadly, his answer was a bit of a non-answer. But the question continues to turn over in my head.

13 years on, and many Aboriginal corporations, mentors, friends and clients later, my views on whitefella guilt have crystallised – a lot.

It’s important for us non-Indigenous Australians to be mindful of our own motivations and emotions when partnering with Aboriginal communities in Closing the Gap.

Guilt and shame can lead us to over-compensate or become White Warriors, treating Aboriginal people as though they have no power, no brains and no capacity. Or, they can turn to anger and oppositional behaviour.

Neither response is helpful for anyone, anywhere along the colour spectrum.

Check what’s behind your own motivations when dealing with Aboriginal people. Ask yourself, ‘How might my emotions be hindering the partners in this union (including me)?’

If you feel like you’ve been led by unproductive anger, guilt, fear or shame at any time – start with ‘sorry’!